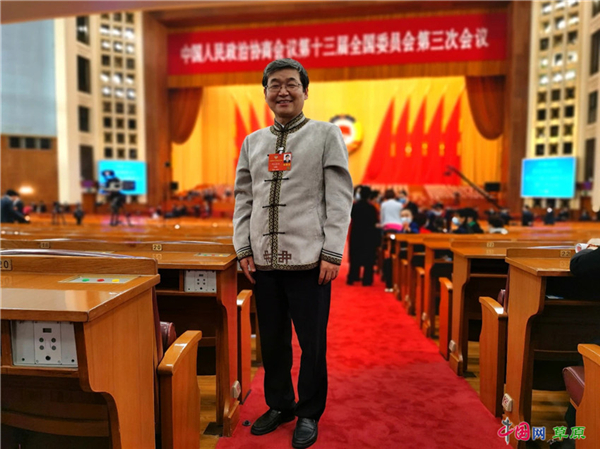 Altantsan at the third session of the 13th National Committee of Chinese People's Political Consultative Conference (CPPCC) on May 21 [Photo/china.com.cn]

Altantsan – a delegate from North China’s Inner Mongolia autonomous region -- submitted proposals to the third session of the 13th National Committee of Chinese People's Political Consultative Conference (CPPCC) on May 21, about speeding up the development of higher education in areas inhabited by ethnic minorities and optimizing an "internet +" Mongolian WeChat public platform.

Altantsan is the president of Inner Mongolia Normal University and also a member of the National Committee of the Chinese People's Political Consultative Conference.

The member said that as a result, the quality and quantity of the university graduates in these areas could not meet the needs of local socio-economic development.

Meanwhile, he suggested that there be a continued follow-up of the allocation of the central government's special funds to support the development of local colleges and universities, to give more guarantees to the institutions of higher education in qualified ethnic areas and that there be an increase of investment in funds.

Adding to the proposals, there are moves to continue to improve the conditions for compulsory education schools in ethnic areas, increase investment in ethnic language protection and further optimize disciplines and professional structures for ethnic regions.

He proposed that the government office of the Inner Mongolia autonomous region select a suitable Mongolian typeface and freely license it to Tencent, the developer of the WeChat platform.

The idea is that Tencent will adopt it in its WeChat and public accounts.

Officials said it is a move aiming to further boost the promotion of information in Mongolian.