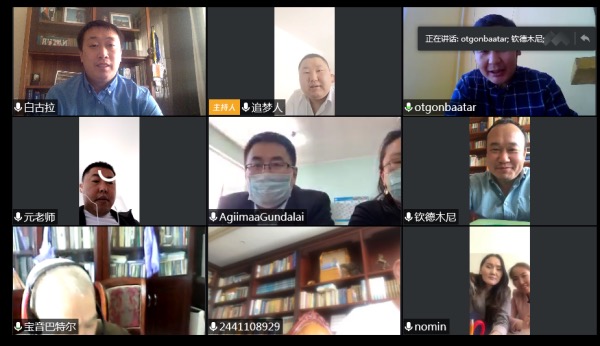 A video conference is held between the Inner Mongolia Normal University and the National University of Mongolia on April 27. [Photo/imnu.edu.cn/]

There was excitement as Inner Mongolia Normal University – in North China’s Inner Mongolia autonomous region – hooked up a video link on April 27 with the National University of Mongolia, located across the border in Mongolia’s capital city of Ulaanbaatar, according to IMNU officials.

They said the two parties discussed and shared their experiences about undergraduate teaching, conversing in Mongolian, during the conference.

Officials from IMNU’s teaching affairs department gave a briefing on measures their university has taken to push forward Mongolian in daily undergraduate teaching during the epidemic period –  and also outlined their online Mongolian open course platforms.

Batubatl, dean of the Institute of Humanities at the National University of Mongolia, thanked IMNU for its support in teaching undergraduates, and gave details of his own university’s teaching conditions during the epidemic via the live broadcast.

The two sides expressed the wish to promote exchanges and cooperation in online sharing courses, so that they can play an active role in teaching and in cultural exchanges.

They also reached further consensus on training of undergraduate exchange students and on teacher training.

Officials from the two universities’ teaching affairs departments and international exchange and cooperation departments participated in the video conference.

They were joined by officials from the IMNU’s School of Mongolian Studies and the Institute of Humanities at the National University of Mongolia.