A public health emergency leadership group was formed at Inner Mongolia Normal University in northeastern China after the outbreak of the novel coronavirus pneumonia in January, according to IMNU officials.

Led by Huang Yali, secretary of the Party Committee of IMNU and Yun Guohong, president of IMNU, on Jan 24-30 the group launched a series of measures to prevent the epidemic from spreading across the campus.

The school postponed the start of the spring semester, in line with instructions from the local government. It also sent messages of support to students and teachers, trying to assuage any panic and anxiety caused by the epidemic and

Officials said that in addtion, the official website, WeChat account and Weibo account of IMNU have followed up with the latest news on the issue and kept the public informed of the measures being undertaken on prevention and control.

Online classes are ready to be held on various platforms, according to the Department of Academic Affairs of IMNU.

Officials said the logistics service group have added shifts, to ensure that there is a group leader on duty every day on campus.

In addition, the family areas of IMNU are implementing semi-closed management, with measures being undertaken such as access control, temperature measurements and daily disinfection in public areas. 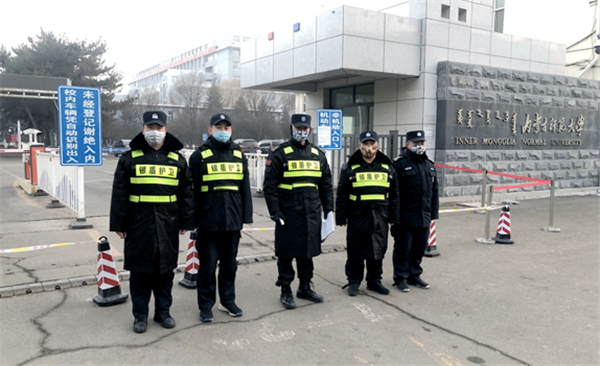 Security guards are on standby at the gate of Inner Mongolia Normal University. [Photo/IMNU]