The Mongolian Clothing and Apparel Research Association was established in Inner Mongolia Normal University on Dec 31.

Bao Zhenyu, secretary-general of the People's Government of the Inner Mongolia autonomous region, and Wei Zhiguo, deputy director of the Department of Culture and Tourism of Inner Mongolia, attended the unveiling ceremony.

Huang Yali, secretary of the Party committee of IMNU, Yun Guohong, president of IMNU, and Vice-president Liu Jiuwan presided over the ceremony.

Shi Mo, deputy secretary-general of the People's Government of the Inner Mongolia, extended congratulations to the association in his speech.

Since 2003, the region has held 16 Mongolian costume festivals, which has become an important event for the development of Mongolian clothing and apparel culture, and the integration of cultural tourism industry in Inner Mongolia.

The establishment of the association is of great significance for promoting the innovation and industrial development of Mongolian costumes.

Inner Mongolia Normal University is expected to carry out in-depth researches on Mongolian clothing, and actively explore new ways of inheritance and industrialization so as to boost cultural tourism in the region.

Huang Yali mentioned in her speech that the university has professional advantages in the study of Mongolian costumes. It has the earliest and most complete design disciplines established in the region, and has co-funded various cultural and art institutes including the Chinese Intangible Cultural Heritage Research Center of Sun Yat-sen University, and Chinese Folklore Research Center of Chinese Ethnic Minorities. 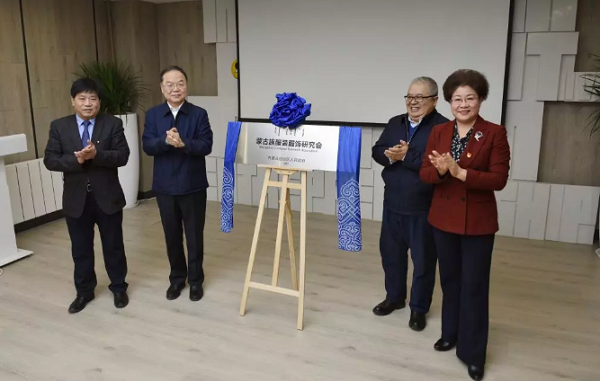 Huang Yali, secretary of the Party committee of Inner Mongolia Normal University, and Yun Guohong, president of IMNU, presides over the opening ceremony of the Mongolian Clothing and Apparel Research Association in IMNU on Dec 31. [Photo/IMNU]