This year marks the 20th anniversary of the enrollment of master's degree in folklore in Inner Mongolia Normal University. An academic seminar was held to celebrate the event in Hohhot, capital of Inner Mongolia autonomous region, on Dec 14.

He said that Inner Mongolia Normal University has become a folklore data construction center and an academic research center in the region. The university has promoted the academic communication between China and the international folklore community.

Jin Hai, deputy dean of the Academy of Social Sciences of the Inner Mongolia, and Wang Laixi, vice-president of IMNU, also gave speeches.

Folklore studies a wide range of traditionally derived, and orally or imitatively transmitted literature, material culture, and custom of subcultures in a society.

The discipline has currently played an important role in the protection and development of minority cultural industries in China.

The study of Mongolian folklore from the perspective of disciplinary construction in China was initiated by folklore scholars such as Danbizhalasang from IMNU. Thanks to the efforts made by various experts, higher education institutes in Inner Mongolia has cultivated many folklore talents and achieved a series of fruitful scientific research achievements, according to Jin Hai. 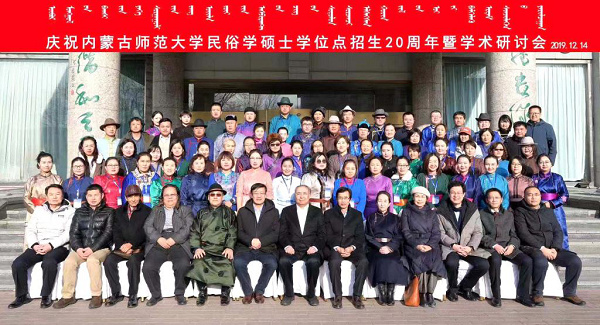 An academic seminar was held to celebrate the 20th anniversary of the enrollment of master's degree in folklore in Inner Mongolia Normal University in Hohhot, capital of Inner Mongolia autonomous region, on Dec 14. [Photo/IMNU]