The research center was co-founded by the College of Music of Inner Mongolia Normal University and the Xinghai Conservatory of Music in Guangzhou, capital of Guangdong province. The new center will focus on studying the ethnic music culture of Inner Mongolia autonomous region and the Yellow River Basin.

IMNU’s music college is the first school of the arts in China's ethnic minority areas since the founding of the People's Republic of China. It offers courses taught in both Chinese and Mongolian.

With its long history and strong competences, the college has been dubbed the "cradle of northern Chinese ethnic musicians". IMNU officials said that since its founding in 1954, the school has provided Inner Mongolia and other parts of China with more than 7,000 outstanding graduates.

Cao Ye, vice director of the Research Institute of the Xinghai Conservatory of Music, said in his speech that the collaboration was expected to provide a platform for academic communications and exchanges in ethnic musical research in Inner Mongolia. 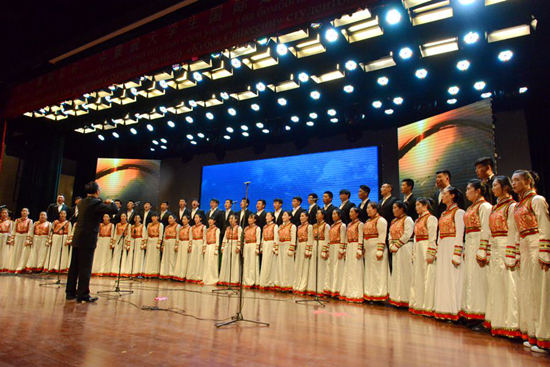 A choir from the College of Music of Inner Mongolia Normal University performs a piece. [Photo/people.com.cn]