The annual meeting of the Arid Region Branch of the Geographical Society of China was held in Inner Mongolia Normal University, or IMNU, on Aug 19-21.

More than 130 experts and students participated in the meeting. A series of academic reports focusing on a theme -- “the effect of climate change on arid regions along the traditional Belt and Road” -- were given at the meeting.

Liu Jiuwan, vice president of IMNU, addressed the meeting. He stressed that the purpose of the meeting was to probe some problems encountered during the process of ecological development in arid regions, as well as share some of the latest theories and thoughts about resource utilization and regional development among academics.

Four distinguished academics gave keynote speeches after the opening ceremony on Aug 20. They included Deng Mingjiang from the Chinese Academy of Engineering, Zhang Yongqiang from Northwest University, Khaulanbyek from the Institute of Ecology and Geography of the Mongolian Academy of Sciences, as well as Hai Chunxing from IMNU.

The Chinese Geographic Society is a major academic organization and an important section of the Chinese Association of Science and Technology. It has played an important role in the development of geographic science in China, since its funding in 1934. 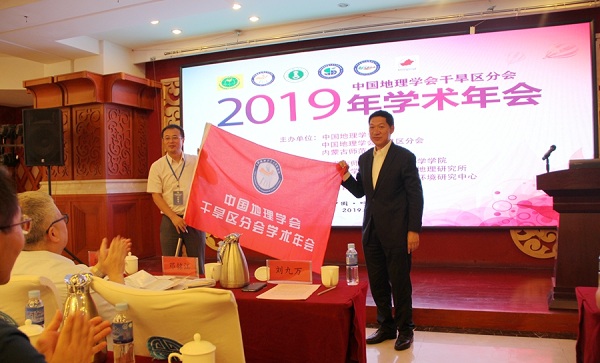 The annual meeting of the Arid Region Branch of the Geographical Society of China is held at IMNU on Aug 19-21. More than 130 experts and students participated in the meeting. [Photo provided to chinadaily.com.cn]