In order to celebrate the grand event, IMNU hosted an art exhibition featuring the works of Lu Bin, founder of the Art School of IMNU, on Oct 22.

Born in 1924, Lu Bin dedicated his life to the education of modern art in Inner Mongolia autonomous region. In 1954, Lu founded the first art school there and helped build the school into a leading art institute among other higher education institutes in the region.

Located at the IMNU Shengle Campus in Hohhot, the Art School of Inner Mongolia Normal University has always been nurtured by local ethnic groups and culture in the China-Mongolia border area.

As the first and largest of its kind in the autonomous region, the school was dubbed "the cradle of fine arts and art education" there and the college has cultivated more than 8,000 artists over the past six decades.

It now exerts great influence in Inner Mongolia and is widely praised for its efforts in the integration of educational concepts and resources, using modern technologies and teaching techniques. 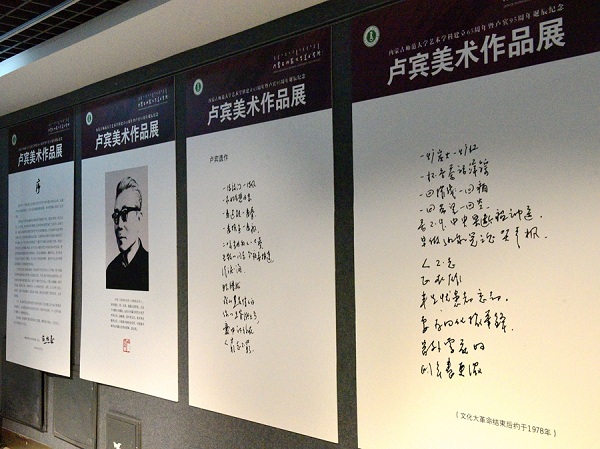 The artworks of Lu Bin, founder of the Art School of Inner Mongolia Normal University, are featured at an art exhibition hosted by IMNU on Oct 22, celebrating the 65th anniversary of its establishment. [Photo provided to chinadaily.com.cn]

Lu Ziqiang (second from left), son of Lu Bin, donates artworks by his father to the Art School of Inner Mongolia Normal University, during an art exhibition on Oct 22. [Photo provided to chinadaily.com.cn]