The 2019 Qinghai Lake College Road Cycling Race kicked off on the shores of Qinghai Lake, the largest inner lake in China, in Qinghai province on Aug 13 – and athletes from Inner Mongolia Normal University, or IMNU, did well according to organizers. 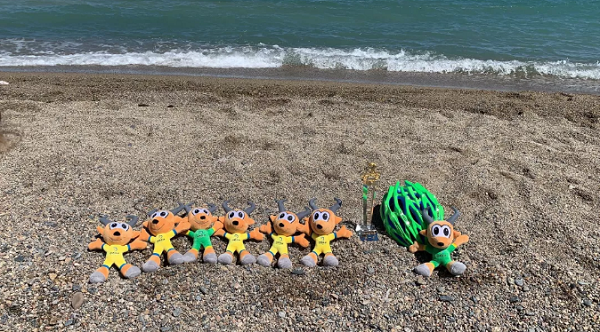 It’s not just the riders that are having all the fun: mascots for the Qinghai Lake Road Cycling Race, take a break and lie on the sand. [Photo/WeChat account of IMNU]

A total of 87 athletes from 14 universities and colleges participated in the two-day competition.

There were two stages to the competition, which had a total length of 53.5 kilometers and which was staged at an altitude of 2,000-3,200 meters.

The Youlesi team from the Inner Mongolia Normal University won the team title and Han Xianpeng, a member of the team, won the individual sprint championship. 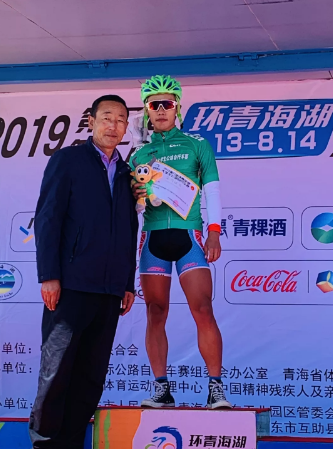 Han Xianpeng, a member of the Youlesi team from the Inner Mongolia Normal University, proudly wears the victor’s green shirt given by the organization committee after his triumph in taking first in the sprint race during the Qinghai Lake College Road Cycling Race on Aug 14.  [Photo/WeChat account of IMNU]

Formed at IMNU in 2011, the team was the first college cycling team in Inner Mongolia. The seven athletes who participated in the event were all from the Sports College at IMNU.

“It is such a great honor for me to compete with so many outstanding athletes from other universities. I am already looking forward to the next event,” said Han Xianpeng after the race. It was the third time Han had competed in the college road cycling race.

“The high altitude of Inner Mongolia helps us a lot in getting used to the altitude in Qinghai. Perhaps that’s why we had the edge,” said Yang Shangchen, a member of the Youlesi team, when asked about their advantage over other teams.

The college road race is seen as part of the Qinghai Lake Road Cycling Race, an international event that started in 2002, which is staged in Qinghai province from June to August every year.

It is the largest road cycling competition in China with the largest number of participants and awards.