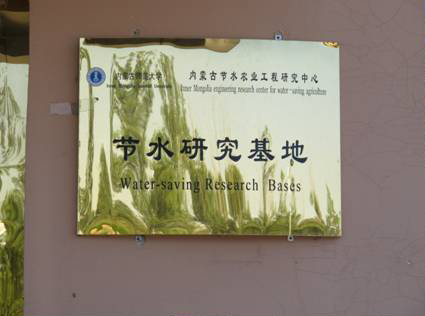 Over the past decade, the center has dedicated itself into the research of such areas as treatment of saline-alkali soil with drip irrigation technology, ecological restoration in desert, water-saving technology for field crops, efficient utilization of water for plants, sewage recycling and water pollution treatment.

The center was established with an aim of addressing the ecological problems in Inner Mongolia such as the deficiency of water resources and ecological fragility, and meeting the needs for development of agriculture and animal husbandry. Since its inception, the center has developed two directions of research: the principle of water saving and new water-saving technology, and owns two laboratories, two bases for field test, one sewage treatment plant and another regional engineering and technological research center for recycling of sanitary sewage.

The center has undertaken over 40 projects at national and regional level such as the projects funded by the National Natural Science Foundation of China, the key projects funded by national Ministry of Education and the Science and Technological Projects for the 12th Five-year plan. Since 2007, the center has published nearly 60 papers, some of which were included by the Science Citation Index (SCI), Engineering Index (EI) and Index to Scientific and Technical Proceedings (ISTP). It has also published one monograph and another textbook. It has won the first prize of Beijing Science and Technology Award and another second prize for the same award. It also won the third prize of the 10th Science Achievements Award of Inner Mongolia Normal University and the university’s Excellent Team of Science and Technology Award.

The center has built a demonstration area in Songshan district, Chifeng city in Inner Mongolia to carry out a test of integrating advanced agricultural technologies in order to promote the development of local agriculture.

The Inner Mongolia Engineering Research Center for Water-Saving Agriculture is looking forward to cooperating with domestic and foreign institutions and colleges.